Wilmington, DE -- Delaware has signed a proof of concept (PoC) contract with IBM to build and test a blockchain-based corporation recordkeeping and filing system. The contract is for 18 months and includes consulting work as well. This prototype will be used to determine how a future full-scale system might look in the future. It's important to Delaware that they maintain their leadership role in the corporate governance industry.

Delaware is home to over 1,200,000 corporations and LLCs. Over 65% of Fortune 500 companies are incorporated in Delaware.

The blockchain technology will enable the State of Delaware Division of Corporations to better track stockholders for all stock corporations. Large corporations have many millions of stockholders. It's important to accurately track stock ownership when it comes time for voting during company elections, annual meetings and polls.

Recording and documenting stockholders is a combination of human and computer processing now. Manual data entry is prone to errors. Delaware is looking to streamline and automate the process as much as possible. Delaware receives over $1 billion dollars in revenue from corporate document filings and retrieval. It is believed that significant savings can be achieved by using the blockchain techology.

Former Gov. Jack Markell is a proponent of blockchain technology. He believes that significant savings could be achieved by making the asset exchange faster, removing monotonous procedures and reducing business risks.

Blockchain is a decentralized system of tracking data. Blockchain uses a global network of computers to jointly manage databases of information. There is no central authority. It is a revolutionary technology which will change many industries in the years ahead. 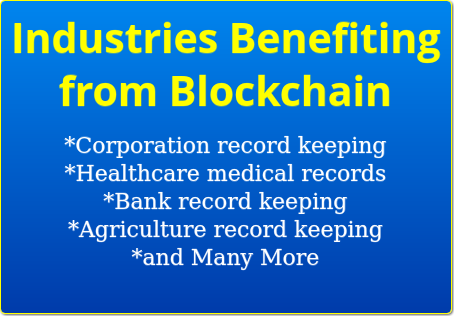 Agriculture is another industry that could see huge benefits from blockchain technology. Of immediate use is the ability to track crops from the farm to the consumer. Recent health scares with romaine lettuce have increased the need for tracking produce and knowing the source of the produce much faster than is currently available. Currently a combination of paper and computer records track produce from farm to consumer. It can take as many as 6 days to determine the origin of a particular batch of produce. Blockchain technology could reduce the time to minutes.

Other industries that could utilize blockchain include real estate, education, supply chain, and logistics. Its an exciting field that promises to revolutionize many industries. Accurate recordkeeping is important and many billions of dollars will be saved with the introduction of blockchain technology. The opportunities are endless.

Delaware looks to maintain its leadership role in the formation and management of all types of business entitities, i.e. corporations, limited liability companies, limited partnerships, trusts, and estates. Blockchain technology is the next step in Delaware's 100+ history of corporate governance leadership.

More information about incorporating in Delaware can be found here.